BID ON EXCLUSIVE EXPERIENCES IN WRIGHT HOUSES TO SUPPORT THE CONSERVANCY

One of the Frank Lloyd Wright Building Conservancy’s biggest annual fundraisers is a silent auction held during our annual conference. This year’s auction at the Madison conference (Oct. 10-14) includes more than 130 unique experiences, collectibles and original artwork. Now we’re giving all Conservancy members the chance to bid online for 15 of these auction packages, ranging from a very rare Wright medallion with a unique backstory (see below) to the chance to live in an entire Wright house for a night.

Online pre-bidding is open now and ends Wednesday, Oct. 10 at 5 p.m. CT. Place your highest bid online and if you’re not outbid when the silent auction closes at the conference on Saturday, Oct. 13 at 8 p.m. CT, you win that item (Conservancy staff will email winning online bidders you to arrange payment after the conference; there is no need to submit your credit card information online).

It’s easy to participate. If you are a Conservancy member, follow the steps to register at charityauction.bid/FLWBC2018 to view the online catalog. Online bids will be accepted until Wednesday, Oct. 10 at 5 p.m. CT, and the high bid online will become the starting bid at the conference auction. Conference attendees will have the final chance to bid on all items.

Thank you to our auction donors for making this possible and to all of our members for participating!

About 30 years ago a friend returning from Great Britain brought me a medallion of Frank Lloyd Wright. I never saw another one like it. A few years ago, curious to discover its origin, I asked my friend Jack Holzhueter, a historian familiar with Wright ephemera, for help. We thought that surely Bruce Pfeiffer at the Foundation Archive would know. He did not—nor did other knowledgeable experts we asked.

Jack contacted a British medals dealer, who identified it: “a cast bronze medal designed by U.S . sculptor John Cook in homage to American architect Frank Lloyd Wright, produced for the British Art Medal Society [BAMS] in 1985.” The society’s description: ”Cook was Professor of Sculpture at Pennsylvania State University and a talented medallist, whose work in the neo-classical idiom and whose meditation on the talismanic properties of the medal has done so much to change the image of medallic art in contemporary America.”

Wanting to know more I tried to reach him at Penn State. He was no longer there and I was unable to get more information. However a friend with connections to the university did some sleuthing and was able to locate him living in New Mexico, but was ill.

I spoke briefly with him and learned that he had been the U.S. delegate to a medal convention in London where he was asked by its president, Sir Mark Jones (past director of the Victoria and Albert Museum), to design a Frank Lloyd Wright medal. (Frank Lloyd Wright’s office for Edgar J. Kaufmann was one of the most important 20th-century objects in the V&A’s collections.) Cook based his design on photographs of Wright. 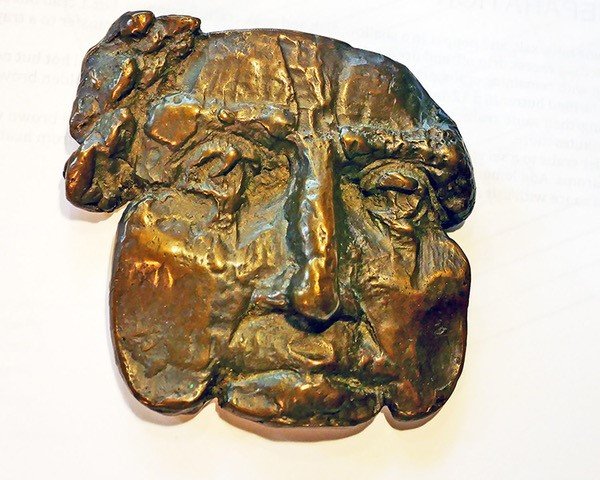