The Colors of Wright: Paint Analysis at the Robert G. Emmond House

When John and Kathleen Leigh purchased the Robert G. Emmond House in La Grange, Illinois, in 1994, they did not envision the colorful transformation that would unfold. A kitchen remodeling in the late 1990s grew into a full-blown restoration, complete with replication of original finishes.

Theirs is a story of discovery and dedication to the commitment and vision of detail-oriented owners as well as one that sheds light on Frank Lloyd Wright’s design philosophy. Thorough investigation of the structure and finishes, informed by archival analysis, helped create an in-depth history of the building’s modifications over the years and a true understanding of its original appearance and ambience. Wright designed the Emmond House while still employed by Adler & Sullivan (part of a series of designs that have come to be known as bootleg projects), and continued to provide design services until at least 1895 when the south porch was expanded. When Robert Emmond died in 1936, his daughter, Margaret Thompson, inherited the house and significantly modified it by adding a veneer of brick to the exterior of the first floor, replacing the wood-framed south porch with one of brick, and reconfiguring the interior, which included modernization of trim and finishes. This article focuses on the analyses used to unveil the house’s original interior and exterior colors and describes how that design reflects the seeds of Wright’s Prairie Style that would mature in his design for Susan Lawrence Dana (1902-1904) in Springfield, Illinois. The Emmond House has an eclectic character, with features that challenge its Queen Anne-style appearance: deep soffits; strongly connected horizontal trim; ribbons of windows (both large fixed and casement sash); and use of natural materials and colors. Investigations into his work of the period revealed that the second floor, especially, was a precursor to Wright’s future work during the turn of the century. 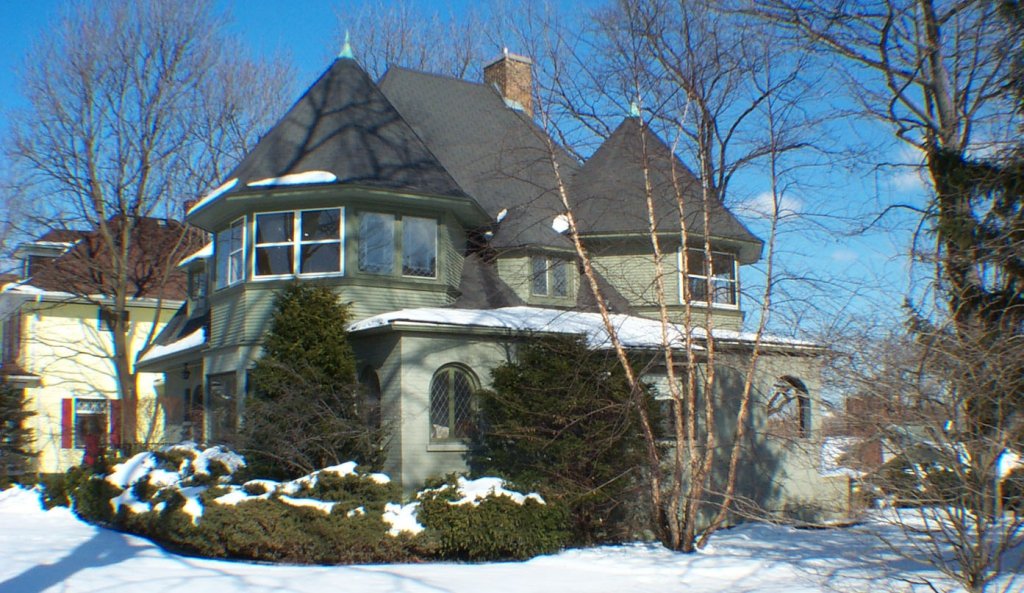 Exterior of the Emmond House in 2000, prior to the restoration of the exterior and interior spaces
Photo by Lesley M. Gilmore

Wright’s 1901 description of “A Home in a Prairie Town” could easily apply to the second floor of the Emmond House: “The interior is plastered throughout with sand finish and trimmed all through with flat bands of Georgia pine, smaller back bands following the base and casings… All the wood should be shellacked once and waxed, and the plaster should be stained with thin, pure color in water and glue.” The second floor of the Emmond House was finished with a sandfloat plaster that celebrated the texture of the aggregate. The paint was a soft velvety calcimine (ground chalk, water and glue sizing), which in Wright’s hand would later evolve into his Prairie style two-part finish with a base color read through a glaze that dipped gently into the crevices between aggregate particles. The first floor of the Emmond House originally had this sand plaster only in the kitchen and pantry; the more public rooms were finished with smooth plaster.

The interior and exterior colors in the Emmond House closely match those of Wright’s other Prairie Style residences, and reflect the philosophy he expounded on in his 1908 article “In the Cause of Architecture”: “… go to the woods and fields for color schemes. Use the soft, warm, optimistic tones of earths and autumn leaves in preference to the pessimistic blues, purples or cold greens and grays of the ribbon counter.”

Getting back to Wright’s original 1892 execution, however, was a long and involved discovery process.

It began with clients who developed a list of questions for their architect, such as these posed for the dining room: “Trim piece (the ‘shoe’) above plant shelf. Is it original or can we do better?” “Dining room ceiling has a second layer of plaster that we would like to remove.” These provocations led to a decade-long series of paint analyses, beginning in January 1998 and extending through the 2007 completion of the project. Investigation of the original blueprints, Wright’s other bootleg homes and historic photographs supplemented the analysis. 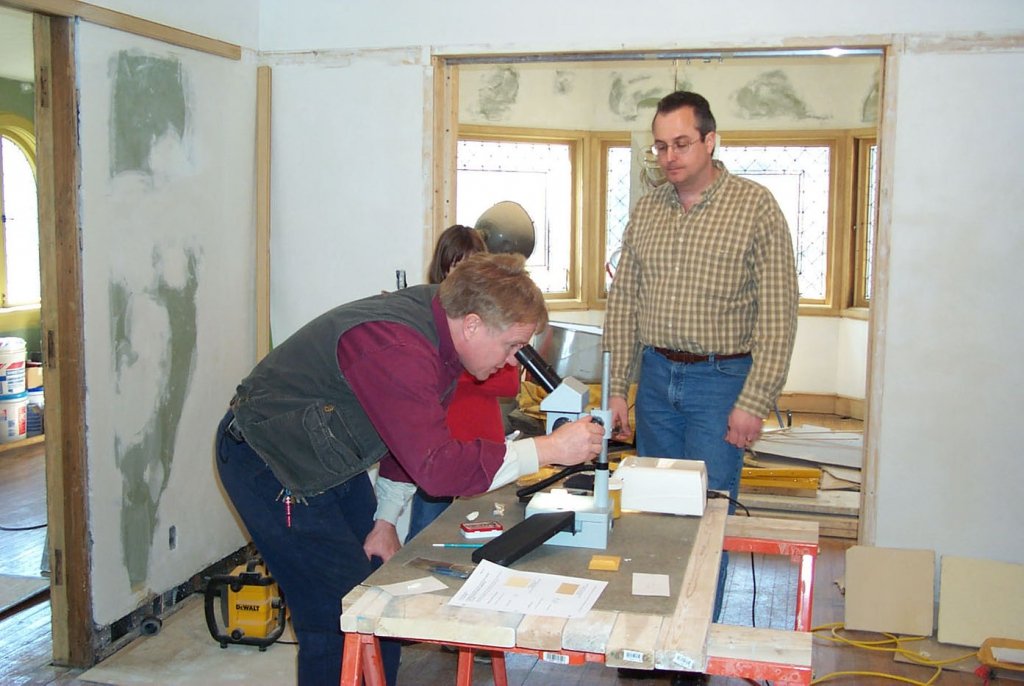 Peter Korab viewing the collected paint samples with Brent Humecki, right, in 2002. Humecki Studios provided the majority of the paint analysis services for the restoration of the Emmond House
Photo by Lesley M. Gilmore

The restoration firm Humecki Studios began by removing test samples from different painted surfaces for on- and off-site microscopic inspections, magnifying each form ten to 100 times actual size. Preliminary on-site microscopic viewings revealed when a specimen was inadequate (too weak, dirty, dull or worn), a time-saving measure that provided the Humecki team the best sampling possible. The substrate (plaster or wood) was tested to ascertain the earliest finish layer embedded within it. An understanding that Wright later used horizontal bands of color (one color for the upper walls, or frieze, and another for the lower walls) prompted sampling at multiple locations, as well as at ceilings and in crevices where repainting and touch-up was less likely to have occurred, and where paint drips have seeped under trim. On the exterior, the best samples were those with the most layers of paint and those most protected from weather. Color identification was performed under natural daylight, and under controlled color-corrected artificial light (quartz halogen fiber optic illuminators with blue-daylight filters).

The colors were visually matched to one of 1,600 colors comprising the Munsell Color System, developed by Albert H. Munsell to numerically define colors. Munsell’s system classifies colors according to three attributes—hue (color), value (dark to light) and chroma (gray to bright). Commercial paint equivalents were then identified to match these specifications. Such an analysis is dependent upon the quantity of representative samples available for comparison and corroboration, their locations, a knowledge of when specific pigments were commercially available and familiarity with paint types and their behaviors over time. As calcimine is often washed or easily abraded off, studying the interior plaster was originally greatly impeded, yet also aided the analysis. The sample results tend to be highly dependable, for example, because calcimine does not have an oil binder whose yellowing over time can alter the results. 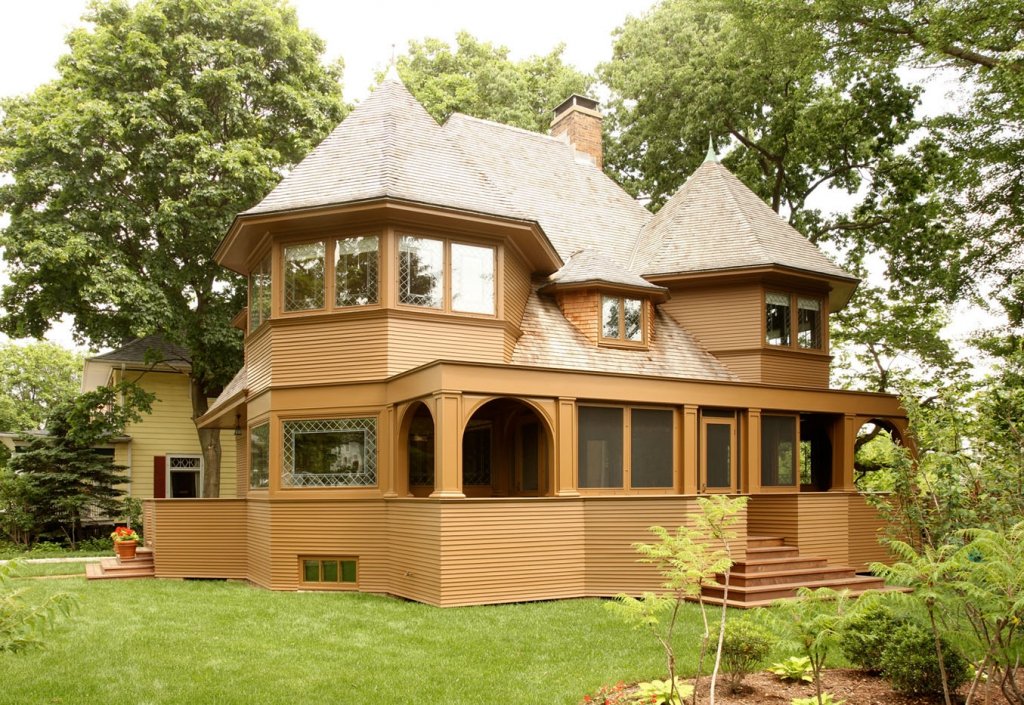 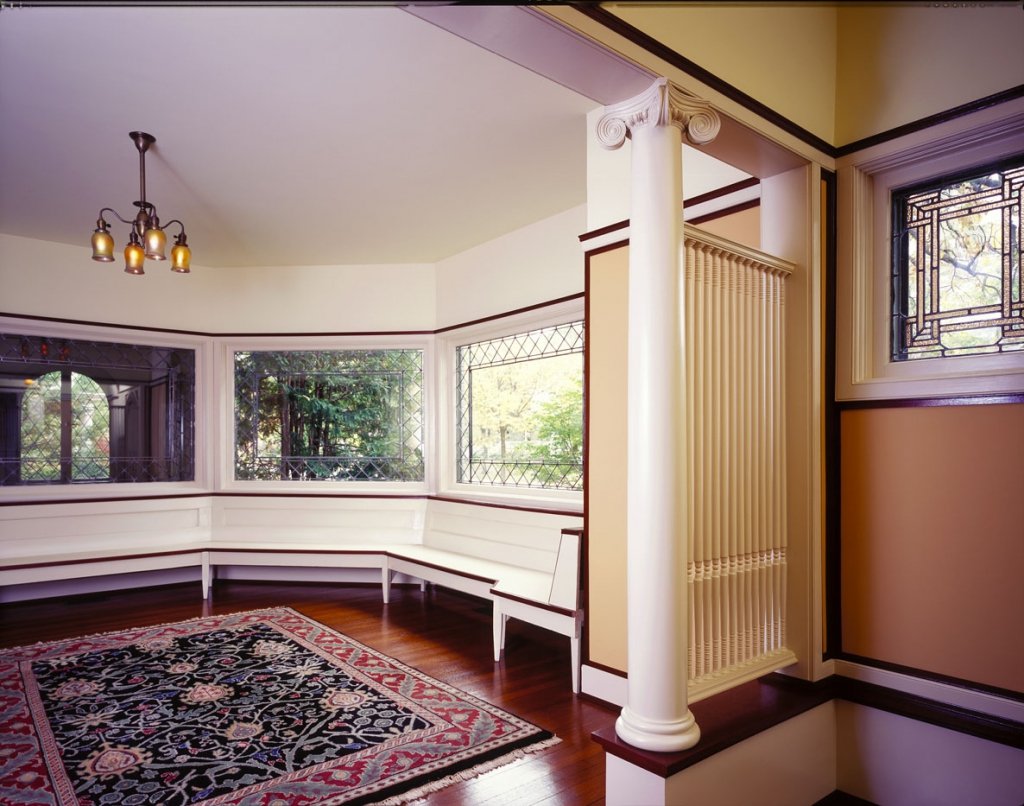 Reception room in 2005, view to the southwest from entry hall, with restored painted wood banquette seat
Photo by Leslie Schwartz 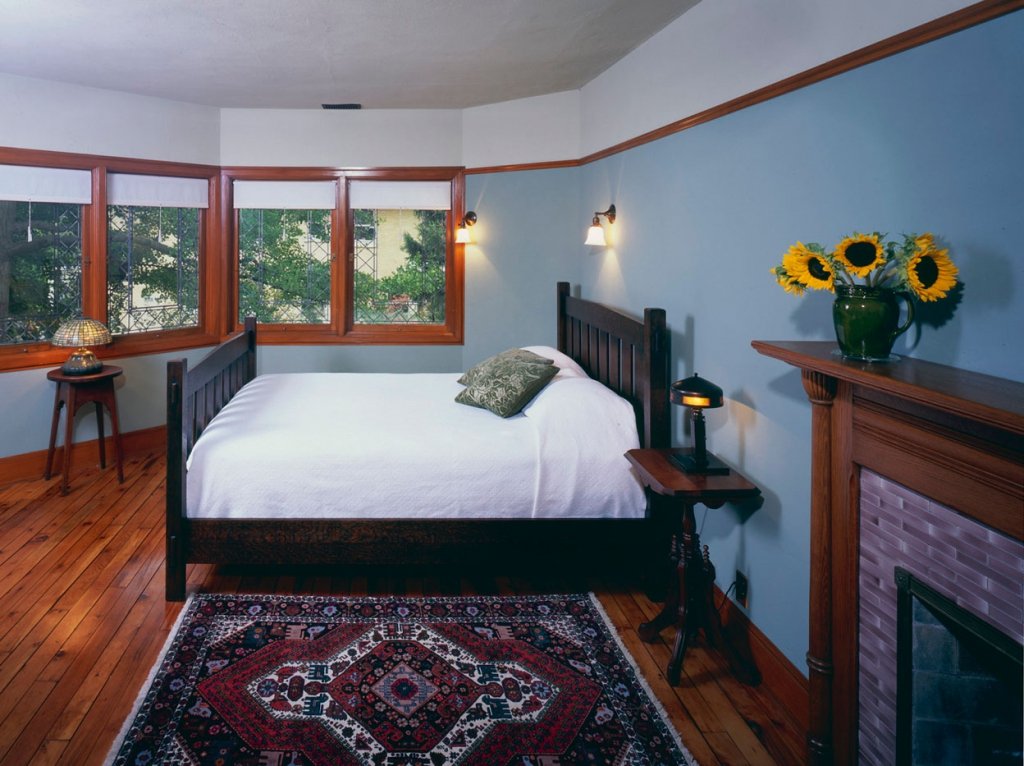 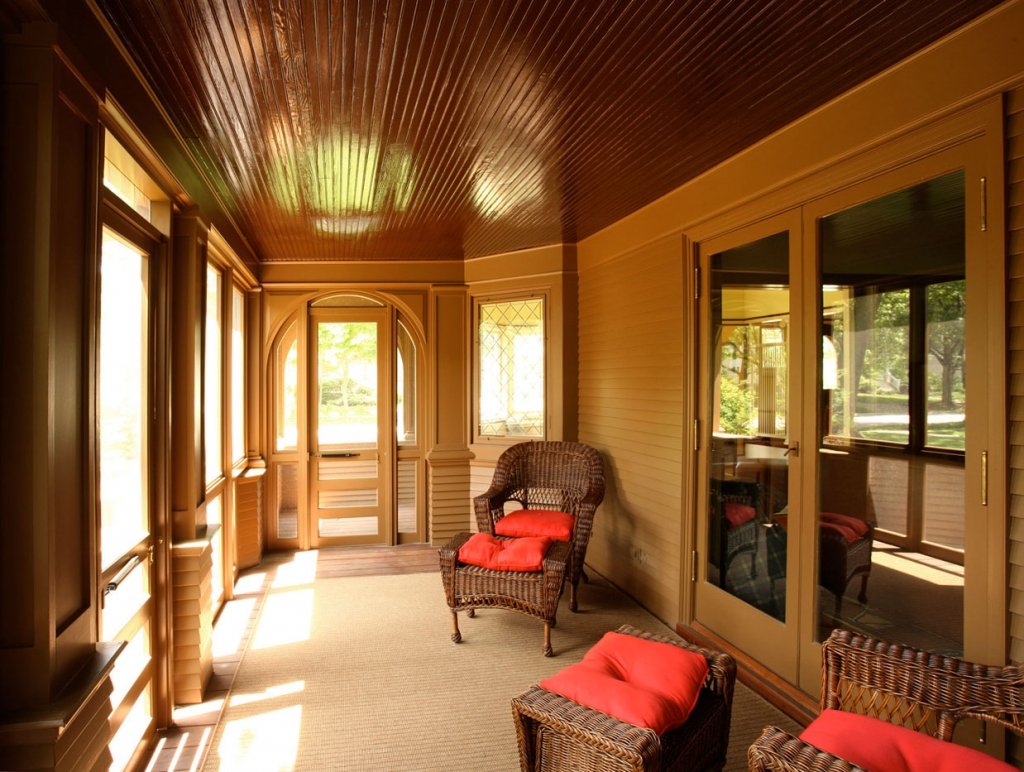 The home’s porch, seen in 2007, was reconstructed to Wright’s 1895 specifications
Photo by Leslie Schwartz 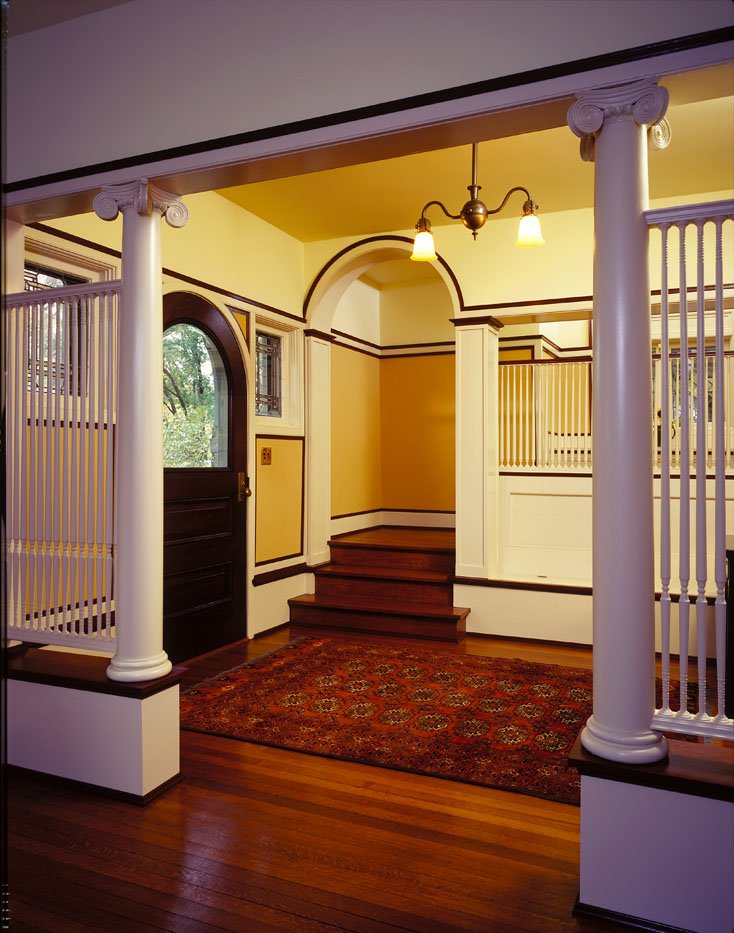 Entry hall of the Emmond House in 2005 with restored door, wood trim and painted woodwork, following restoration of the home’s interior
Photo by Leslie Schwartz 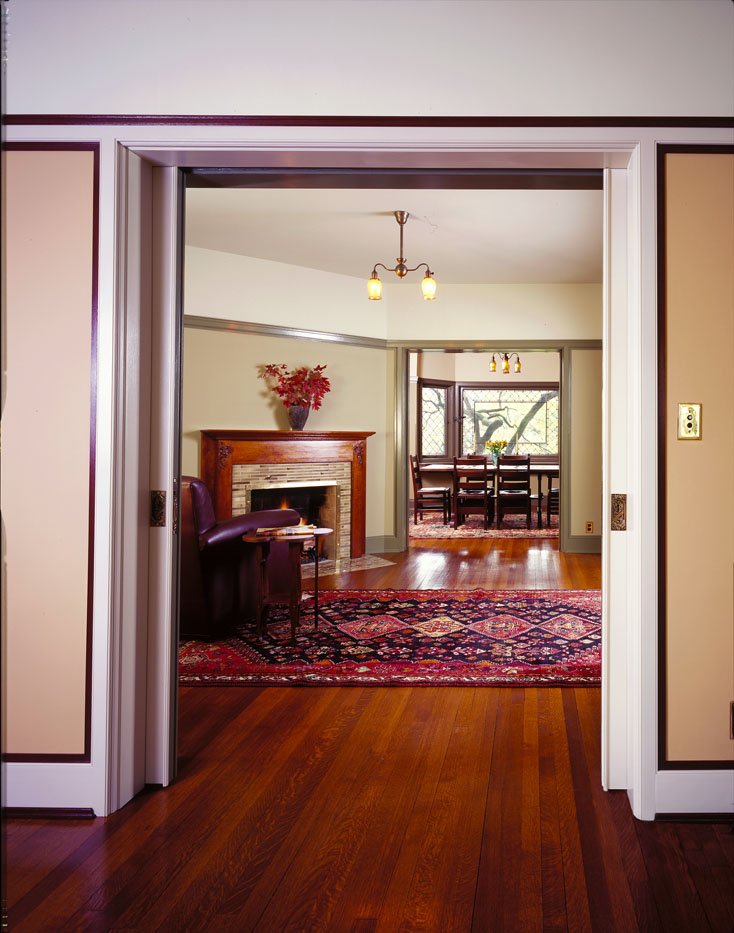 Entry hall of the Emmond House in 2005, looking through the sitting room into the dining room, following restoration of the home’s interior
Photo by Leslie Schwartz

The ultimate finish and color selection used for the Emmond House restoration stemmed from the current owners’ desire to replicate the original colors, in a durable and maintainable state. Further testing—and a comparison with an application of new calcimine—revealed that a flat sheen high-quality latex paint yielded visual results similar to those of calcimine. The original interior colors of the Emmond House were determined to be just as Wright intended. The lower wall surfaces throughout the interior were richer, darker versions of the colors of each room’s frieze and ceiling. First-floor trim pieces were finished with high-gloss oil-based enamel, the sheen evident in historic photographs. The frieze and ceiling of the entry hall/reception room were a soft yellow; the lower walls were a deep golden peach. The colors change from room to room, as one progresses through the first floor, from a light green and olive scheme in the library, to the more embracing woodsy beige and umber-tan colors of the dining room, where the trim is dark brown. The kitchen and pantry are a yellowish tan common to Wright’s interiors of the era.

The second floor rooms are also reflective of Wright’s later “natural” color philosophy. Three bedrooms on that level share a similar palette of hues, with light gold ceilings and friezes and golden yellow lower walls. Physical evidence confirmed the original use of a continuous head trim (now removed), which had separated the frieze from the lower wall. The master bedroom, a relative oddity in the color story, was distinct in its light olive green frieze and ceiling and teal lower walls. These upper floor colors correspond to similar yellows, browns and greens originally used at the Susan Lawrence Dana House (1902-1904) in Springfield, Illinois, which translate similarly on the sandfloat plaster despite a variance in finish application. The decorative schemes integrated there included more deeply saturated hues (including the burgundy shade inspired by the sumac plant); painted wall murals; bolder trim; colored art glass windows, doors and light fixtures; and interior and exterior brick.

While the scope and budgets of these two residences were vastly different, the interior coloration is comparable and informative. The exterior of the Emmond House features narrow clapboarding and ribbon windows that hug the roof line, separated by continuous wood trim of a simple profile. The house was heavily modified over the years and changes have included the installation of a brick veneer at the first floor and stucco at the north gable.

The original color of the exterior wood had been changed 22 times—to medium to light brown, various shades of white and beige and a variety of greens.

Determining the most historically accurate color was hindered by deterioration of these multiple coats over time and by the original application of a resinous primer that prevented proper adhesion of the topcoat—something not found on all samples taken. The exterior color analysis ultimately revealed an earthy tawny-brown color on the clapboards, soffit, fascias, trim and window sashes. The sole differentiation in exterior palette was the use of a reddish stain on the roof shingles (based on testing of shingles from dormer sidewalls) of the steeply pitched roof. The newly refinished Emmond House now serves to demonstrate a high point in Wright’s early career, illustrating his and his client’s passion to promote a natural aesthetic. The Leighs have carried on this philosophy, and their efforts to return the century-old home to its original glory have been executed beautifully.

Editor’s Note: John and Kathleen Leigh received a Wright Spirit Award in 2009 for their restoration of the Emmond House.